Hey M Night Shyamalan, Stop Independently Coming Up With The Same Idea As Me!

M Night! Come on, man! I thought we were friends. And by friends, I mean people who don't know each other. What's up with you independently coming with a story about a guy with a murderous split personality just like I did? You even chose the same title as me! Geez Louise, couldn't you have come up with some other designation that perfectly encapsulates your narrative?

Just look at how awesome the book cover is that I commissioned from the artist Christiana Helgeson. 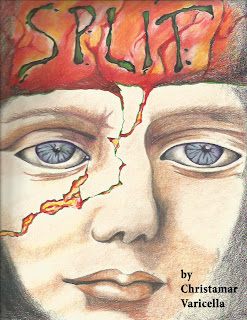 Isn't that freaking awesome?! I had intended to publish my short story as a standalone, but I liked the cover so much I thought I might wait and see if I could grow the story into a novel. While I was dawdling, you totally beat me to market!

What's with the rush? I know we live in a  competitive creative environment and everything, but have you ever considered taking the final print of one of your movies and just sticking it into a drawer for a little while? It's something to think about.

Despite the fact that, judging by the average Hollywood production schedule, you must have come up with your idea at roughly the same time, or even a little before I came up with mine, you should probably cancel your distribution deal and have your film removed from theaters ASAP. It only seems fair to me.

In the meantime, I'm going to get back to writing the other three novels I have in the queue before getting getting around to expanding my short story Split into a full length novel.

When will I finish? Who knows? But when I do, I'd like to be able to sell the film rights.