Review: All About Roachie 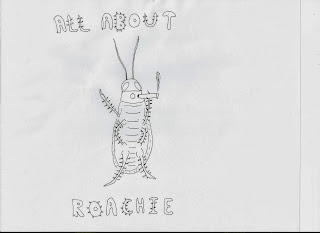 All About Roachie
by Darwin Blattam
Esteemed Publishing, 476 pages
Reviewed by Christamar Varicella


It is not clear to what genre belongs the novel, All About Roachie.  If anything it seems to fit with the series of animated insect movies that debuted in the late 1990s and early 2000s.  Movies like Antz, A Bug’s Life, A Bee Movie, A Termite’s Tail, A Fly’s Fable, The Beetles’ Hard Days Night, Death to Tse Tse, and so forth.  And yet, somehow, Pixar and other production companies failed to delve into the world of cockroaches.  Herein lies the establishing premise of All About Roachie.  The protagonist, Darwin, is extremely bitter that his species has been left out of the spotlight.


Darwin spends his days sulking and flipping channels, his anger inflamed every time he comes across a bug movie re-broadcast on cable.  “Another movie about ants,” he laments.  “Those guys are just mindless drones.  You might as well make a movie about sheep.”  Soon he engages in an extended rant.  “Bees again?  Do you think people would eat honey if they knew how it was made? Wake up, People.  You’re eating bee vomit!”


Darwin berates filmmakers for taking artistic liberties such as having the roaches speak English instead of an insect language, and for portraying some animals as being capable of higher intellect while others remain simplistic and mute.  And why is it, he wonders, that in these movies some of the human characters are capable of understanding the insects while others are not?


Darwin seeks to redress the wrongs of Hollywood by penning his own screenplay.  He then takes his manuscript to Irving, a down and out talent agent, who, low and behold, is one of a handful of humans capable of understanding Darwin.


Not only does Darwin speak English, he writes it as well.  And after some convincing Irving reads Darwin’s screenplay (with the help of a magnifying glass) and is sufficiently impressed to offer representation.  The remainder of the novel is divided into two sections: 1) Irving’s seemingly insurmountable task of getting a movie about cockroaches made as his temperamental screenwriter sits in his pocket refusing to compromise.  2) The screenplay-within-a-novel about a very determined cockroach who survives despite insurmountable odds and who scores thousands of insect babes.


Despite his grand ambition, it soon becomes obvious, even to Darwin, that no screenplay gets made in Hollywood unless a bonafide star is attached.  Darwin helps his own cause by appearing on the pillow of Meryl Streep, whispers in her ear, and convinces her to stretch the boundaries of her considerable acting talent by not only volunteering to play one of the main cockroaches, but also to learn cockroach language--in essence, a series of clicks and antennae movements.


But even with Streep on board, the film faces seemingly impossible challenges, not the least of which is to convince studio executives to allow a movie to be made in a seemingly nonexistent language with English subtitles.  But any would-be doubters be warned.  If you think Darwin will give up, you don’t know Roachie.  That bug is a survivor.